A Peaceful Death by Margo Beilby

Posted by Shayne Higson 77sc on August 26, 2018
Post by dyingwithdignitywa. 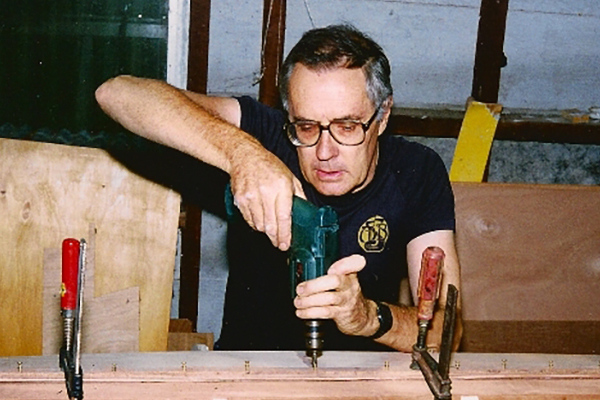 My husband of 51 years, Mike Beilby, had always been an active and productive person. He was a deputy principal until his retirement. He built and sailed full-sized yachts and model yachts and built and flew model planes. He did much of the fitting out of the house we built as owner builders. He spent much of his time in his workshop.

He had been an asthmatic for most of his life and this gradually developed into COPD (Chronic Obstructive Pulmonary Disorder) until by the end of 2012 he was down to 20% lung capacity. His doctors and specialists told him that there was nothing that could be done to cure him. After he died, I was told that he would have eventually drowned in his own lung fluids. He was also diagnosed with Parkinsons in 2012.

By 2013 he was reduced to shuffling from room to room. All he could do was read, do Sudoku puzzles or watch TV. I had to help him dress, help him shower and help him into bed. If he fell over, he couldn’t get up and I would have to run across the road to get a neighbour to help lift him up.

After three trips to hospital, which did nothing to help his condition, Mike decided that his life was no longer worth living and he wanted to die before he became so weak that I could no longer nurse him at home. He didn’t want to go into hospital where he would lose control of his life.

He joined WAVES (now DWDWA) and then Exit International. Through Exit he obtained the Peaceful Pill Handbook. He studied this and decided that his best option for a peaceful death was Nembutal. Nembutal can be bought legally in many countries but not in Australia. Through Exit he obtained online information about Nembutal suppliers in China. He contacted several of these and found one that would supply him with 10g of Nembutal powder for US $250. He ordered and paid for the drug online.

He discussed his decision with me and with his sons. We could see how unsatisfactory his life had become and, although we didn’t want to lose him, we totally supported him in this decision. One problem we had was that one of our sons is a vet. Nembutal is a vet drug used every day as an anaesthetic and to put animals down. So Mike had to be very careful not to involve him in any way.

Mike’s Parkinsons meant that he could no longer write legibly. He found an app on my laptop that enabled him to record a video of himself. So he recorded what was essentially a suicide video explaining who he was, what his condition was and what he intended to do when the Nembutal arrived. He made it clear that his was his own decision and had nothing to do with me or his sons.

When the drug finally arrived in the post I pointed out that now he had it, it was up to him to decide when he wanted to take it to end his life. He just looked at me and said, “Tomorrow!” We checked to make sure that our vet son would be at the clinic that day.
Mike wanted me to go off shopping and come back and find him dead so there would be no possible legal repercussions for me. But I told him that after 51 years of marriage I wasn’t going to let him die on his own.

So on the 31st of July 2013 I took Mike his cup of tea in bed, helped him up and made him breakfast. He sat down and did a Sudoku puzzle and had a cup of coffee and a piece of bread and jam with a Travacalm pill. I was sitting doing a piece of patchwork when he looked across at me and said, “Oh good. I’ve got this puzzle out. I can die now!” – a typical crazy sense of humour to the end.

He sat in his favourite chair looking out over our bush block with a little table in front of him with a 50ml glass of water, the Nembutal powder and a glass of the port his son had bought him for Xmas. He mixed the powder into the water, drank it down and drank the glass of port to cover the taste of the drug and help its effectiveness. I sat beside him and held his hand as he lay back in the chair and went to sleep. Then his breathing slowed down and stopped and after a short while a little pulse by his mouth stopped. His death was peaceful and dignified. He was in the house that he had helped to build, looking out over the block that he loved, with me beside him.

I waited another half hour to be sure that there was no chance he could be revived, then rang his medical practice to tell them that Mike was dead. One of the doctors came up and pronounced him dead. I had left the table and the glasses in front of Mike’s chair. When I told the doctor that it was suicide he rang the coroner’s department.

Two of their officers came out and spent the day questioning me. I showed them Mike’s video and they were impressed. But they still had to treat it as a suspicious death and me as a suspect. A Major Crime detective came out and asked me a few questions. They gathered up the two glasses, all Mike’s multitude of medications, my laptop and the card from China that had contained the powder. Then they took his body away.

In spite of the fears of some of my friends, I have not been charged with anything. It is illegal in this state to help someone to commit suicide but Mike made sure that all the decisions and actions were his.

Everyone who has an incurable condition and is facing a degrading, slow and painful death in unaccustomed hospital surroundings should be able to have Mike’s opportunity to die peacefully at a time and place of their own choosing with their loved ones around them.