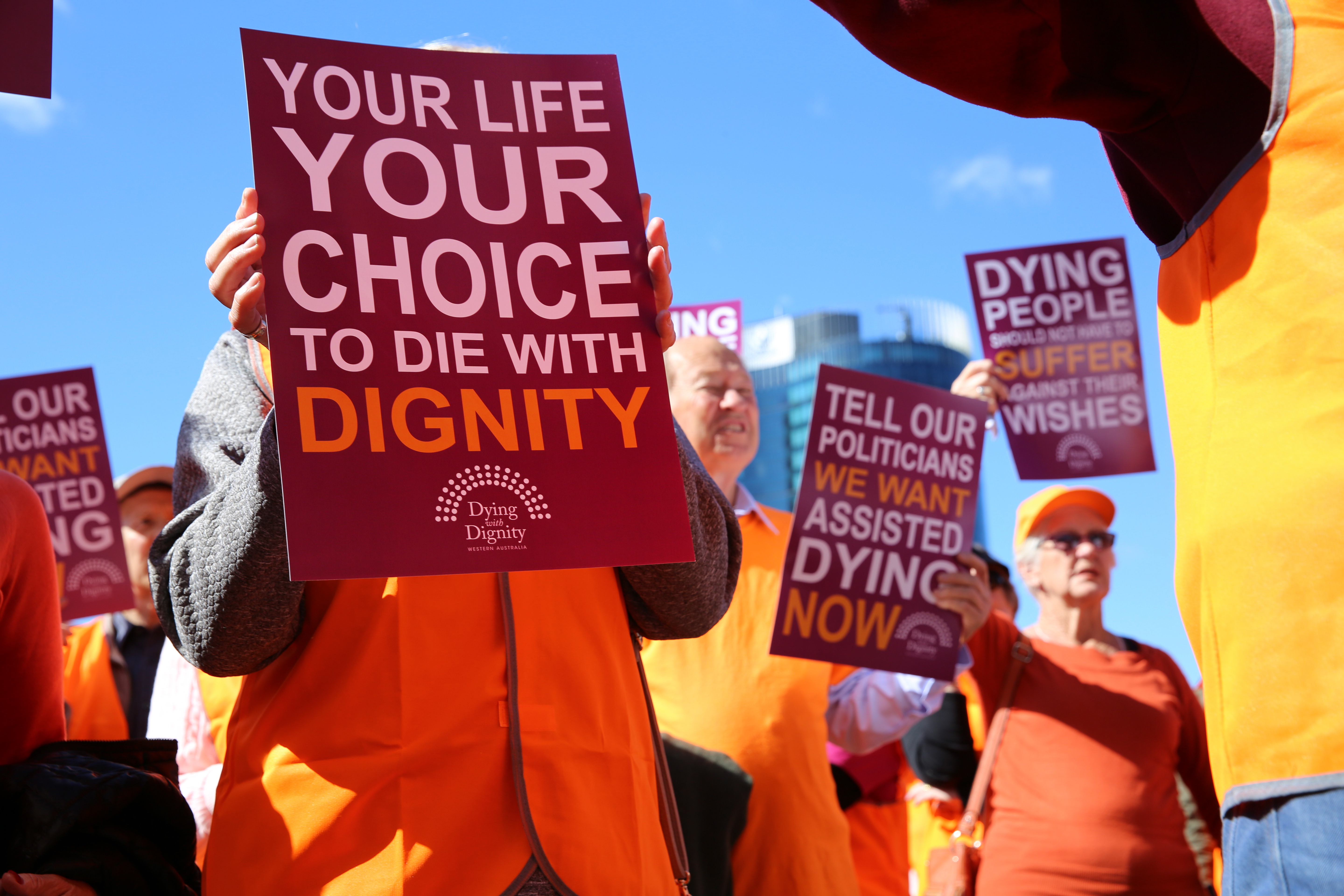 There is much misunderstanding about voluntary assisted dying (VAD). Some of this is the result of ignorance, lack of information or deliberate misrepresentation by conservative factions. Dying with Dignity WA aims to educate and inform to foster intelligent debate about this issue. To do this it is important to understand the meaning of the terms used and be conversant with the facts in relation to VAD.

The organisation is happy to discuss any personal questions you may have on an informal and confidential basis. You can call or email the president, Steve Walker or vice-president, Murray Hindle via the contact details provided under the ‘Contact’ tab on this website.

Euthanasia is the act of ending the life of a chronically or terminally ill individual with the dual purpose of relieving unbearable suffering and facilitating a quick, peaceful death.

Voluntary assisted dying (VAD) is a quick and peaceful death brought about by a person taking or a doctor administering a prescribed lethal dose of medication. In Western Australia, access to VAD is only granted after the repeated and rational request of a person who has satisfied all of the eligibility criteria under the Voluntary Assisted Dying Act 2019 (the Act). The Act also contains safeguards for the person and his or her health practitioners.

Under the Act a VAD death is not suicide. (See also under "Suicide" below).

The legislation in Australia is similar but not identical in every state. You can click here to view a comparative table of Australian VAD Laws prepared by Go Gentle Australia.

Where the person self-administers the medication this can be done either at a time of their choosing and without further assistance, or under the supervision of a doctor, depending on the law of the relevant jurisdiction.

'Terminally ill' means suffering from a terminal illness, which is expected to end in death within a relatively short period of time, usually assumed to be 6 months, or 12 months for neurodegenerative conditions. ‘Terminal’ is a legally recognised term in Australia and there is a long-standing practice by Australian insurance companies to accept a prognosis of less than 12 months to live for the payout of a life insurance policy.

People are said to be competent, or have capacity, if they have sufficient understanding and memory to comprehend the nature and consequences of a decision, and to evaluate and weigh relevant information in making that decision.

This term applies to a person who is not capable of indicating whether they want to be helped to die is given a substance to hasten death. NB: the legalisation of involuntary euthanasia is not contemplated by any VAD laws passed or being contemplated in Australia, or currently in existence globally.

The intentional act of killing oneself.

NB: It is preferable to restrict use of the word ‘suicide’ to those persons taking their own life who may have gone on to live a happy and purposeful life with appropriate intervention. According to the American Public Health Association, “Medical and legal experts have recognised that the term ‘suicide’ or ‘assisted suicide’ is inappropriate when discussing the choice of a mentally competent, terminally ill patient to seek medications that he or she could consume to bring about a peaceful and dignified death.”

The WA legislation specifically provides (in section 12) that “For the purposes of the law of the State, a person who dies as the result of the administration of a prescribed substance in accordance with this Act does not die by suicide”.

Palliative Care is healthcare that aims to relieve the suffering of patients, but not cure them. It is provided for patients in all disease stages, including those undergoing treatment for chronic diseases, and patients who are dying. The practice is often combined with hospice care, which provides palliative care specifically for the dying, while focusing on comfort rather than medical intervention. It includes a range of treatments that relieve a person’s pain or suffering. It can include medical, physical, mental and spiritual comfort for both patients and their carers. The central credo of palliative care is ‘to neither prolong nor hasten death’.

TERMINAL PALLIATIVE SEDATION (TPS) and THE DOCTRINE OF DOUBLE EFFECT

TPS is the gradual, titrated increase, by continuous infusion, of sedatives and analgesics, usually without the provision of food and fluids, until the patient enters a coma and remains so until death occurs. It is generally considered a treatment of last resort when a patient’s pain and suffering can no longer be controlled. According to the late Dr Rodney Syme “it [terminal sedation] is used in exactly those circumstances where other doctors might provide assisted dying if they were asked”.

The doctrine of double effect is integral to the practice of TPS. It makes intention in the mind of the doctor a crucial factor in judging the moral correctness of the doctor’s action in treating a patient. The effect is that if a doctor is tending to someone who cannot be restored to health, the doctor can give the patient medication which may have the unintended consequence of helping them die more quickly, provided that the doctor’s actual intention is to ease suffering. What the doctor must not do is give the person medication with the intention of helping them to die – even if only death will end their suffering. This doctrine protects doctors where they are charged with hastening the death of patients.

This doctrine leads to the dubious conclusion in the case of TPS that it is permissible to kill someone slowly as a side effect of pain relief but not intentionally, painlessly and peacefully at the request of a terminally ill, mentally competent person who has satisfied the eligibility criteria under the Act.

In reality there is little to differentiate the practice of TLS from euthanasia of a patient without consent.

This is a medical instruction not to eat or drink anything at all. If it is written above a patient’s bed it alerts nurses not to provide food or drinks of any kind.

A patient may also decide to stop eating and drinking and/or to refuse further treatment and such a decision must be respected by all the patient’s carers.

This is a way of delivering food, via a tube, directly through the skin into the stomach. A doctor makes a surgical hole through the abdominal and stomach walls and fixes the tube in place. People who cannot swallow food temporarily or permanently can benefit from PEG feeding.

This is a written list of instructions to your doctor or health practitioner, made out in anticipation of possible treatments for health problems. In its official form it is known in Western Australia as an advance health directive (AHD). An AHD must be signed and witnessed at a time when you are competent. You can list specific conditions under which you do not want particular treatments such as resuscitation, antibiotics, or nutrition or hydration. Provided it is properly executed an AHD is legally binding and nobody can override it. More information about Advance Care Planning including a sample AHD and FAQs in relation to AHDs are provided under RESOURCES or can be accessed by clicking here.

This is a trusted person to whom you provide the legally-binding authority to make health decisions for you, if you are unable to do so for yourself. To nominate this person you must complete and sign a statutory document (an enduring power of guardianship (EPG)) at a time when you are competent to do so. An EPG must be signed by you and your enduring guardian in the presence of an independent witness or witnesses in accordance with the requirements of the jurisdiction in which it is signed. When deciding on whom to appoint, you should consider who would best understand your values and wishes, and who would have the skills to make good decisions for you.

More information about Enduring Powers of Guardianship including FAQs about EPGs can be found in the report on Workshop 5 under "RESOURCES - Workshops" or can be accessed by clicking here.

This is an assumption that safeguards, initially put in place to underpin legislative reform, may in time be eroded so they become no longer effective or may lead to other unintended, harmful consequences. The review of existing VAD legislation as provided under the applicable Act may result in changes to the law in accordance with due parliamentary process. This is democracy, not a slippery slope.

WHAT IS LEGAL IN AUSTRALIA AS AT 1 JANUARY 2022

What is legal in Australia now?

Please see our Advance Health Planning page for the current Australian law regarding communicating to your doctor the medical treatment that you would like to have, or would not like to have, if you are no longer able to communicate your wishes.

The Australian Centre for Health Law at the Queensland University of Technology has established an excellent website which explains the legal issues around end-of-life care and decision-making. We encourage you to visit this site for reliable and up-to-date information. Click for their website