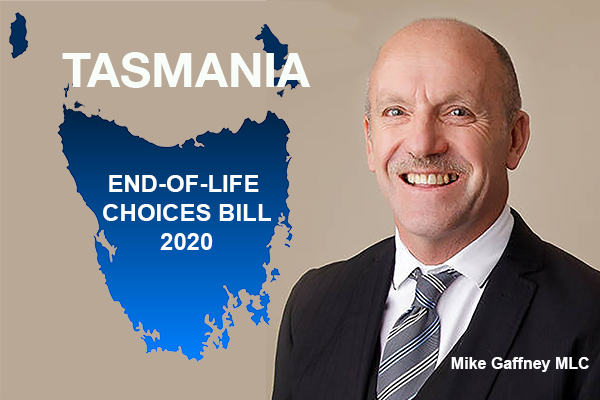 Tasmanian Legislative Council independent, Mike Gaffney, has released a draft consultation voluntary assisted dying bill with the intention of introducing the legislation for debate in August.

The End-of-LIfe Choices (Voluntary Assisted Dying) Bill 2020 aims to provide a voluntary assisted dying process for people deemed eligible for the procedure along with safeguards and legal protections to those who provide the assistance.

There have been three other attempts to pass assisted dying legislation in Tasmania over the past 11 years and all of them failed. However, with the Victorian Voluntary Assisted Dying law implemented in June 2019 and a similar law passed in Western Australia in December 2019, advocates are hopeful that there will be enough cross-party support in the Tasmanian Parliament to see this Private Member’s Bill succeed.

Mike Gaffney was on a committee that considered the 2009 VAD Bill and he believes people should have a choice.

“There is still going to be situations where palliative care is not going to relieve intolerable suffering,’’ he said.

Dying with Dignity Tasmania president Margaret Sing said the legislation was an opportunity for the state to offer people choice on end-of- life decisions.

According to the draft bill, a person seeking to end their life with medical assistance must be ‘suffering intolerably in relation to a relevant medical condition’ due to their medical condition which must be ‘serious, incurable and irreversible’. They also have to be over 18 years old, meet residency requirements and have decision-making capacity.

A medical practitioner to whom a first request is made may refuse to accept the request for any reason. This includes holding a conscientious objection to providing assistance to the person to die. A practitioner who refuses a request must immediately note their decision in the patient’s medical records.

A practitioner who accepts a request will become the patient’s primary medical practitioner (PMP). They must notify the Registrar of Assisted Dying that the first request has been approved and must either refer the person to another medical practitioner for examination, request all relevant medical records, or request consultation with a psychiatrist or psychologist.

A person must not make a second request to the primary medical practitioner within 48 hours unless they are likely to die within seven days or lose their decision-making capacity in two days.

If the final request is approved, an application is made to the Registrar for a substance prescription, and if approved, it is supplied to the primary practitioner through a pharmacist.

A person can decide at any time to cease the process either orally or in writing.

As part of the public consultation, 32 forums will be held across the state during February where community members can express their views on upcoming legislation. The forums will be followed by more targeted consultation between March and June.

Dates, times and venues for the upcoming forums can be viewed here - End-of-Life Choices forums