As the campaign to legalise voluntary assisted dying in Western Australia progressed a number of high profile supporters spoke up in favour of this compassionate, end-of-life choice. 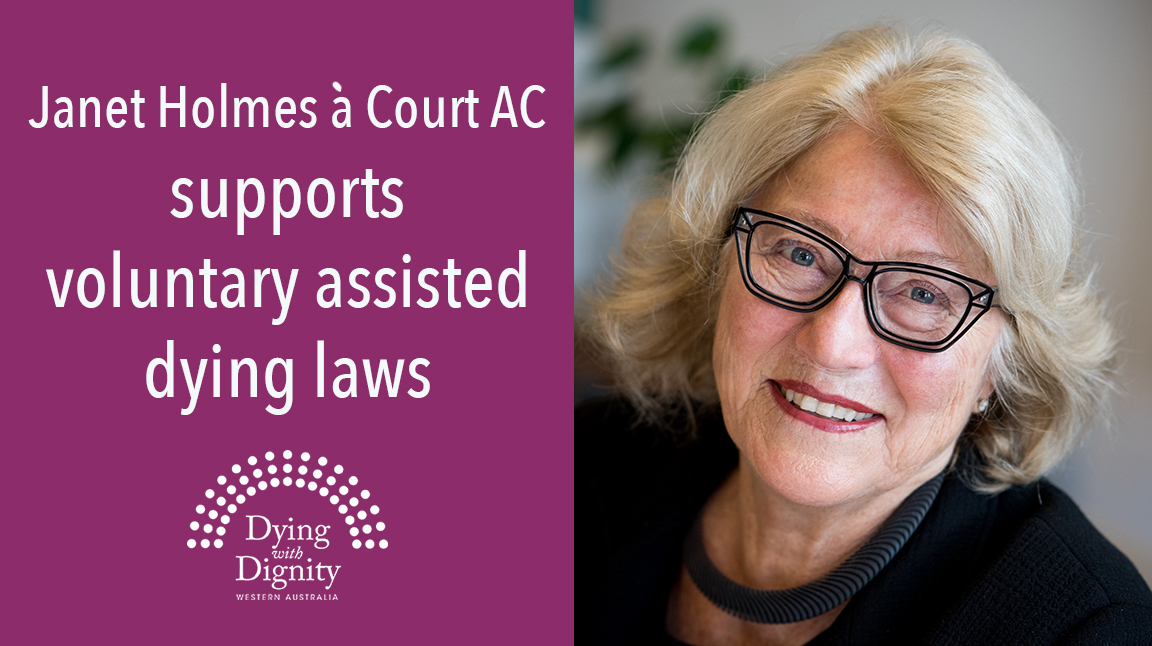 “I support the humane idea of people having control over the method and manner of their dying, just as they should have control over their lives. A person who is terminally ill and experiencing intolerable suffering should have the right to choose to die, painlessly and with dignity. A doctor who has the courage and compassion to help them must be protected by the law." 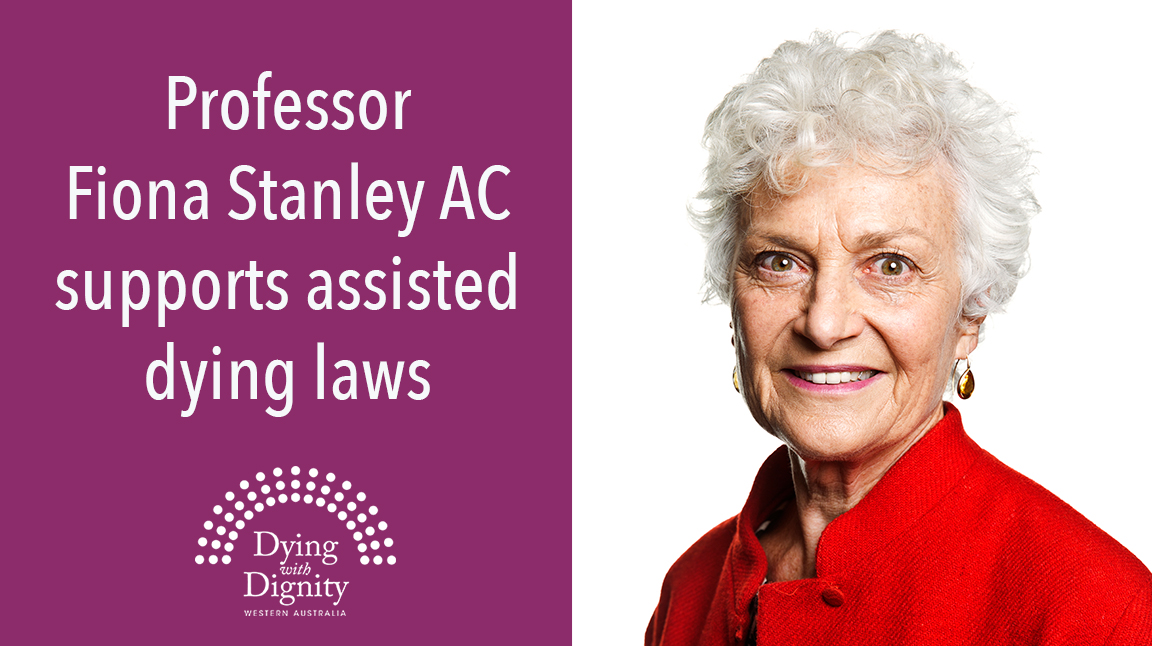 Professor Fiona Stanley AC - Respected doctor and former Australian of the Year, distinguished researcher and ambassador for Dying with Dignity.
"It’s not just because I’m a humane doctor that I support voluntary assisted dying legislation (along with the majority of Australians). It is also because of personal experiences - my aunt, my husband and my mother all suffered at the end of their lives. If we had been able to give them the peaceful deaths they wanted, it would have been so much better." 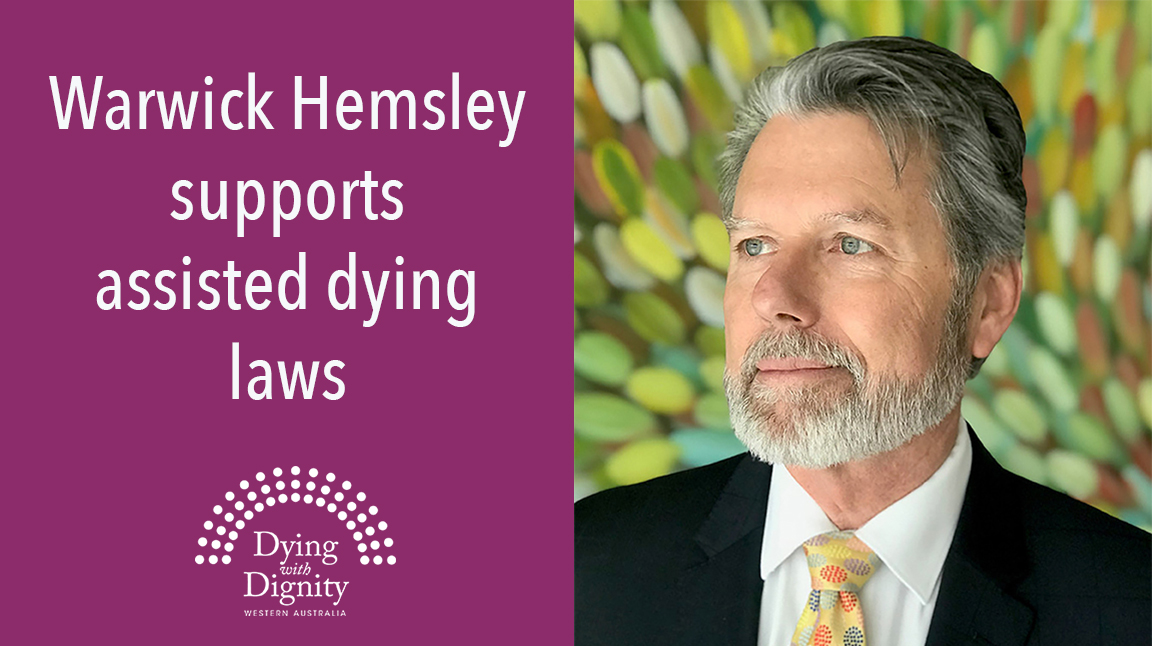 Warwick Hemsley, businessman, philanthropist, patron of the arts and ambassador for Dying with Dignity WA.

“Our loved ones deserve support for their final wishes with compassionate laws that allow them to receive assistance in dying if they ask for it." 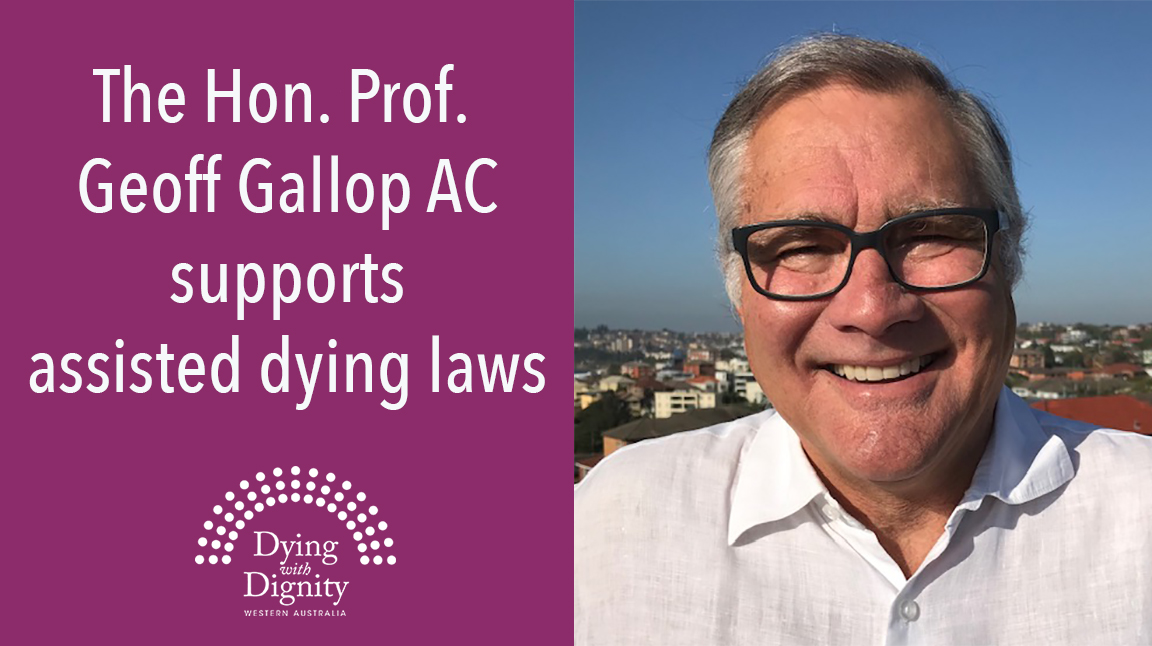 "The continuum of end-of-life care should include assisted dying for those whose suffering has become hopeless and unbearable. Ensuring a dignified death is surely the mark of a civilised society." 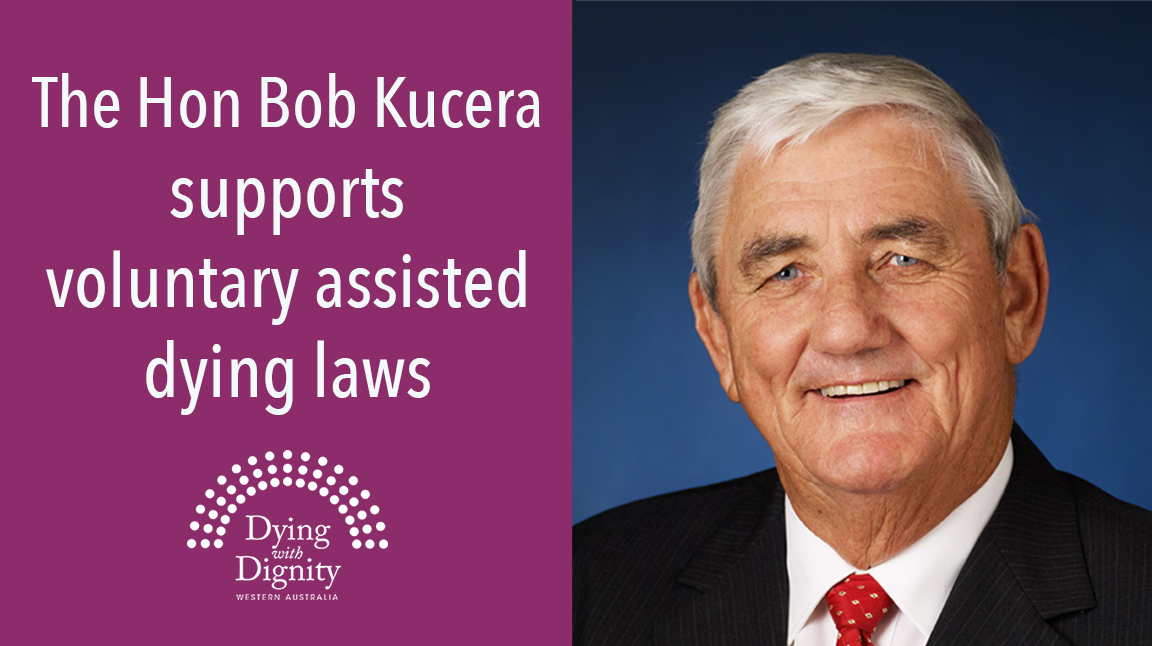 The Hon Bob Kucera is a staunch supporter of the Voluntary Assisted Dying Legislation.

“Over 35 years as a frontline officer I saw first-hand the countless times people took their own lives. Almost always they died without dignity and alone leaving their loved ones with a lasting and devastating legacy of trauma and grief. As a Health Minister and now as deputy chair of a major aged care provider, I witness the terrible dilemma faced by doctors and health workers struggling to cope with the agonising effects of terminal illness and the pleas of their patients begging for a compassionate release. I have personally lived through this in just the last year through the deaths of two cherished, much loved relatives and two dear friends. This sensible and well-crafted legislation gives those like them the choice to die with their loved ones, when and where they themselves decide. I urge all Parliamentarians to represent the will of your electorates and give those who are suffering this choice.” 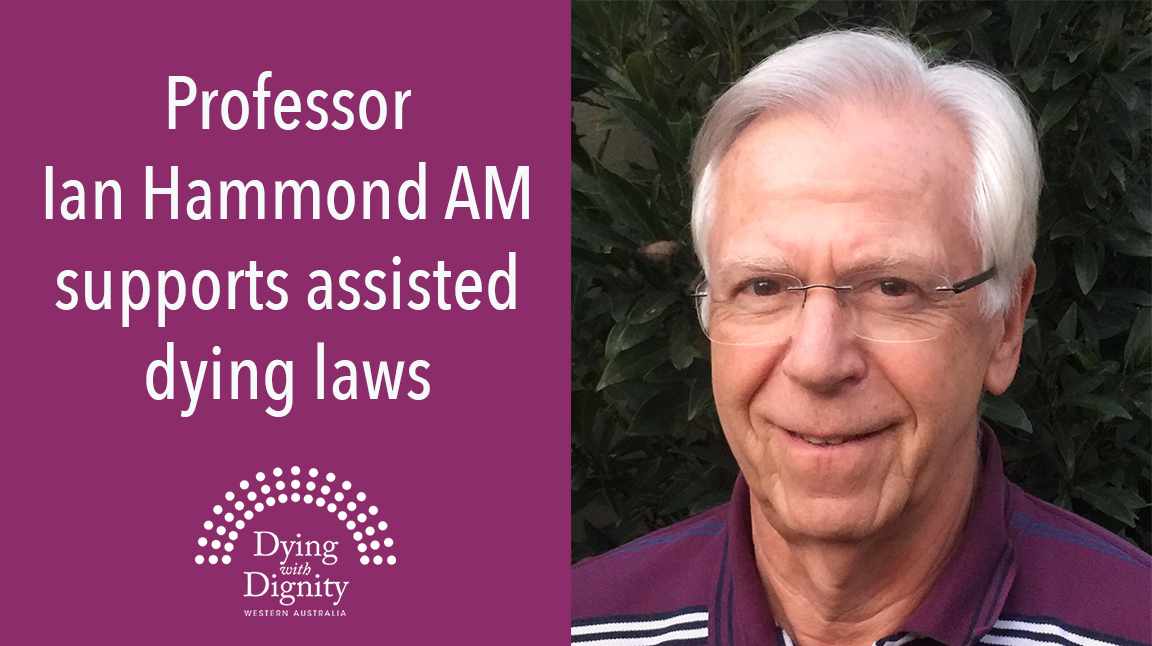 Clinical Professor Ian Hammond AM, retired in 2012 after 30 years as a Gynaecological Oncologist at the WA Gynaecological Cancer Service based at KEMH and SJOG Subiaco.

"In my professional career, at least 20 patients had asked if there was anything I could do to end their suffering, despite their having expert Palliative Care, but sadly there was nothing more that I could offer. I believe that every person should have the right to have control over their death, especially when faced with unrelieved suffering due to terminal illness with no prospect of cure. If I had a disease where life had become unbearable, I should like to have the choice to be able to end my life, at the time of my choosing surrounded by family. I strongly support the Voluntary Assisted Dying legislation, currently before the WA parliament, that when enacted will make this possible.” 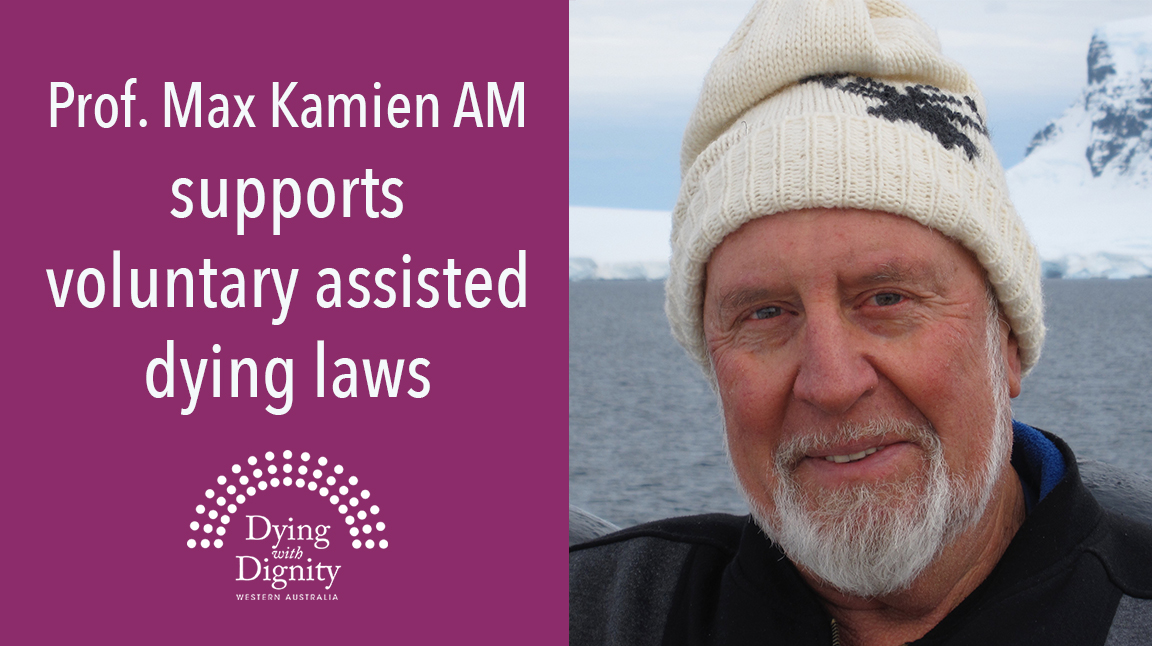 “I have been a doctor for 60 years and have looked after many people with demeaning medical conditions. Few fear death but nearly all fear the way in which they might die. The passing of the current VAD bill will be a comfort to such people even if most of them will not avail themselves of that choice." 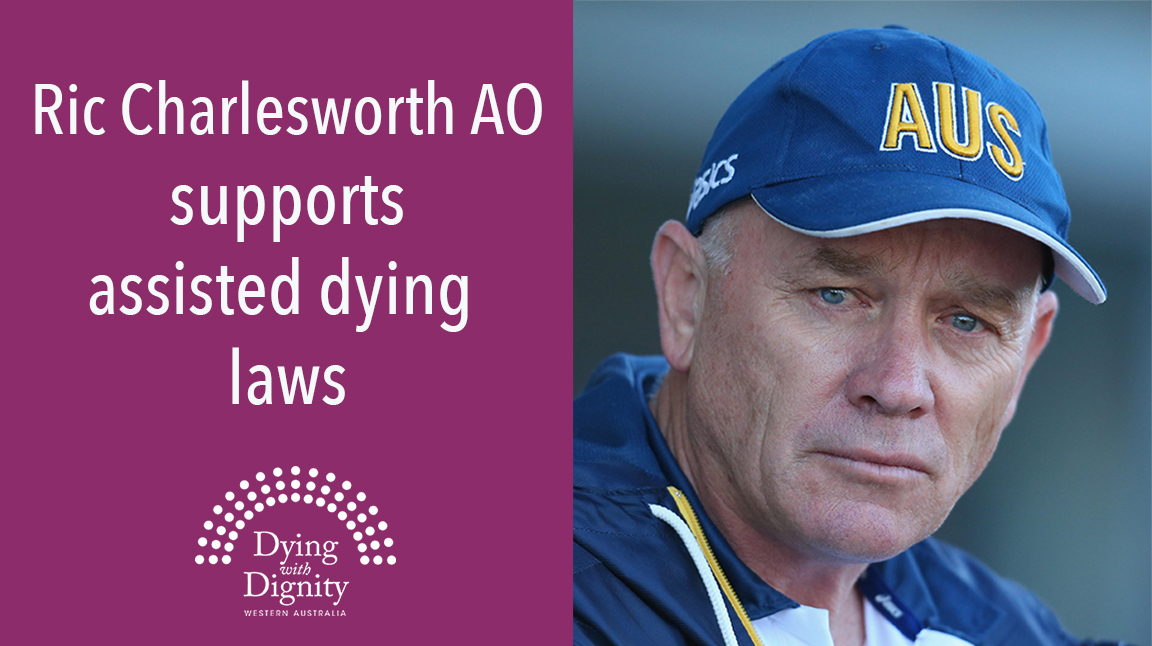 "I watched the deaths of my mother and father-in-law. Both were unsatisfactory in their own ways and contrary to their expressed desires. We can do this so much better and the Voluntary Assisted Dying legislation is an important step along that journey in this area of public policy. I have had so many conversations with friends and family members who understand we are all hurtling towards the inevitable. Almost universally there is support for a planned and sympathetic approach to one’s final days. This legislation has wide support. I would wish this option be available for myself and for many close to me.” 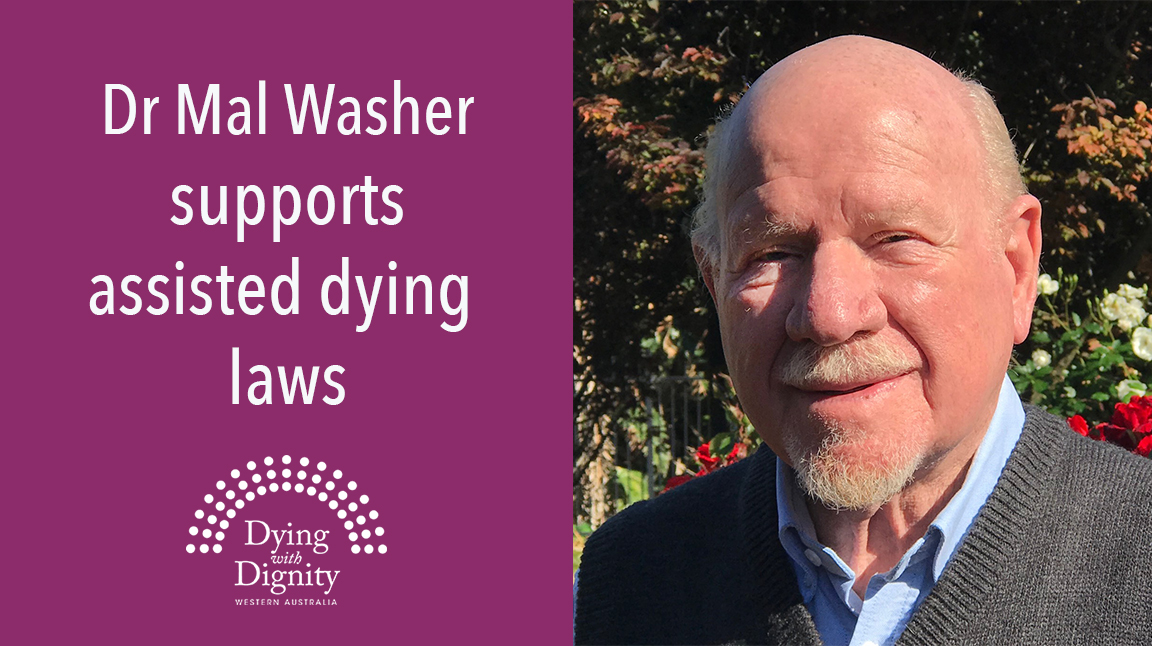 “Everyone should be entitled to a good birth, a good life, and a good death with the dignity we all deserve.” 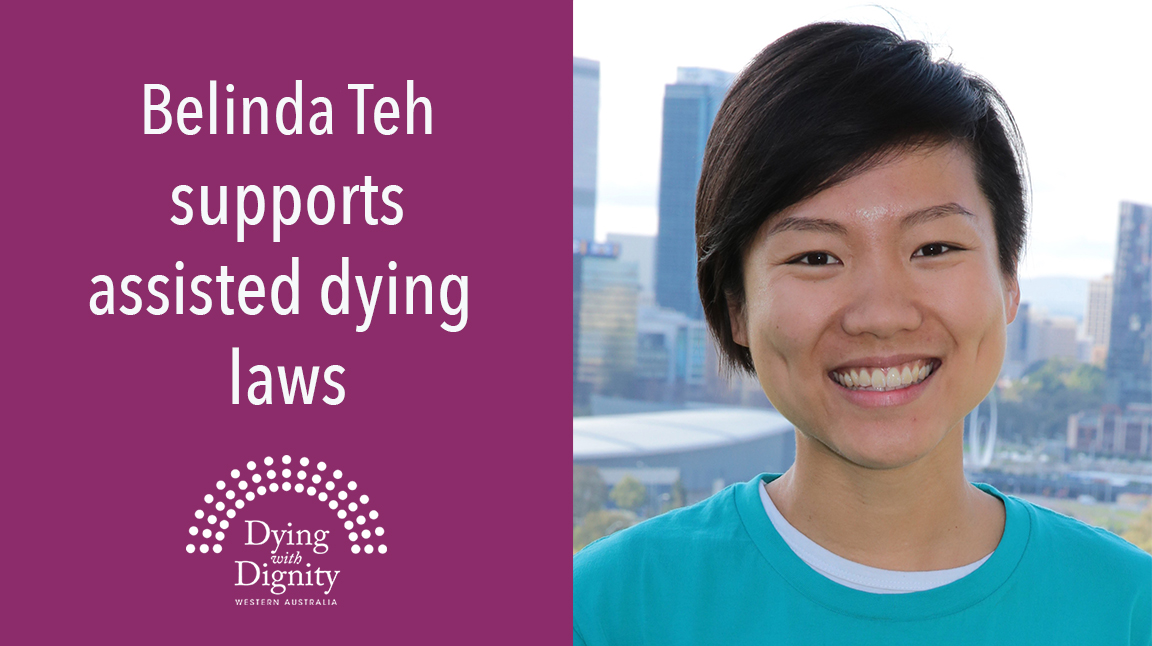 "My Mum died in a way that will haunt me for the rest of my life. Her doctors and nurses were excellent and her care exemplary, but my mum fell into that very small cohort of patients for whom terminal sedation doesn't actually work.

Our community needs the WA Parliament to pass the Voluntary Assisted Dying Bill so that people don't have to suffer the way my mum did."