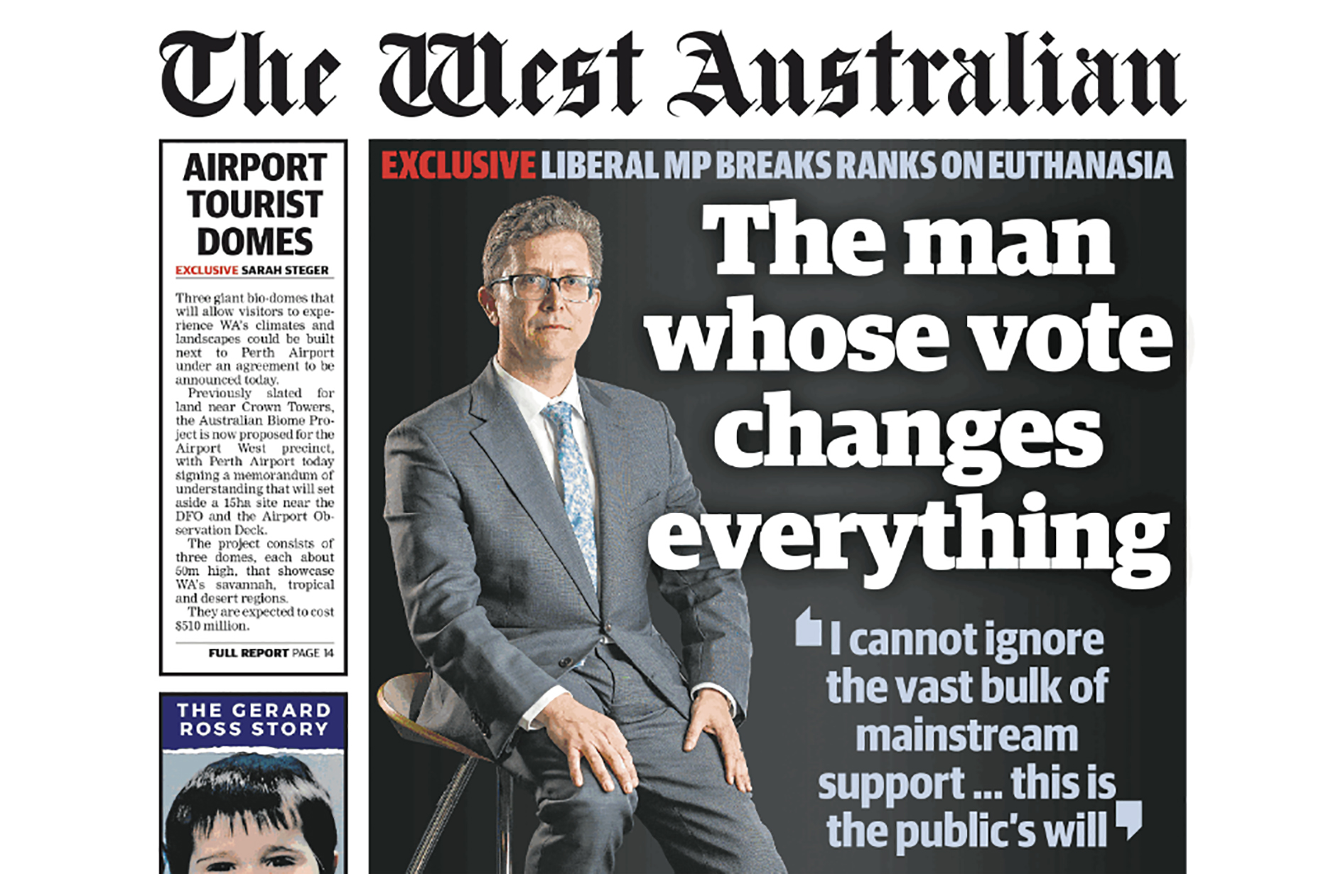 A Voluntary Assisted Dying law for Western Australia is one step closer this week as two Upper House Liberal MPs broke ranks and declared their support for the Bill currently being debated in the Legislative Council.

On Tuesday 15 October 2019 first-term MP Tjorn Sibma, who represents the North Metropolitan Region, was the first Liberal MLC to confirm that he will be voting yes in an exclusive interview with The West Australian.

“I cannot ignore the vast bulk of mainstream support of this as I am a servant of the community I represent and this is the public’s will,” Mr Sibma said.

“This Bill is narrow in scope but will be hugely beneficial to a small, very specific but meaningful group of West Australians. It is a modest, moderate incremental adjustment to our existing legislation.”

On the following day, fellow Liberal MLC Jim Chown revealed that he was no longer undecided, announcing that he too would be supporting the voluntary assisted dying legislation despite admitting to The West Australian that he had "actually lost a bit of sleep over it."

“I certainly believe that the population at large is ready for a change of our culture and certainly our medical practice to allow people to have quality of life and quality in death if they choose to do so," said Mr Chown.

“One of the reasons that has swayed me is the coroner’s findings from 2012 to 2017 of 199 cases of intentional self-harm by persons with terminal illness or debilitating illnesses.

“If we can help at least half of those people from doing so by adopting this Bill, we have done a great thing on behalf of the people of Western Australia.”

Dying with Dignity WA President, Steve Walker welcomed the news, saying it was now clear that the Bill will pass the second reading vote in the Upper House.

"The next stage of the debate, where amendments are proposed and considered, is likely to be a more gruelling process, but we are hopeful that the debate will remain respectful and that we will reach a final vote on the Bill before Parliament rises in December," said Mr Walker.

A number of Upper House MPs have indicated that their support will be contingent on certain amendments being passed. Mr Chown, and some other MPs, would like to see a prohibition on doctors from being able to initiate discussions with patients about VAD. But while the Health Minister, Roger Cook has promised to take a close look at all proposed amendments, the Government has indicated that they would be reluctant to restrict sensitive, end of life conversations between a doctor and their patients. Victoria is the only jurisdiction in the world to have such a prohibition.

On Thursday 17 October, Kalgoorlie-based Labor MP Kyle McGinn became the latest Upper House member to throw his support behind the Voluntary Assisted Dying Bill, all but guaranteeing the historic legislation passage through the Upper House.

According to a report in The West Australian, Mr McGinn said a commitment to indigenous navigators was a “must” to maintain his support going forward.

“I have a strong belief there needs to be, without question, a navigator through the VAD system for Aboriginal people, and this position needs to be filled by an Aboriginal person," Mr McGinn said.

The Second Reading vote is expected to take place on Tuesday 22 October 2019. The Bill will then be considered clause by clause.