An Australian has won the Marilynne Seguin Award 2022 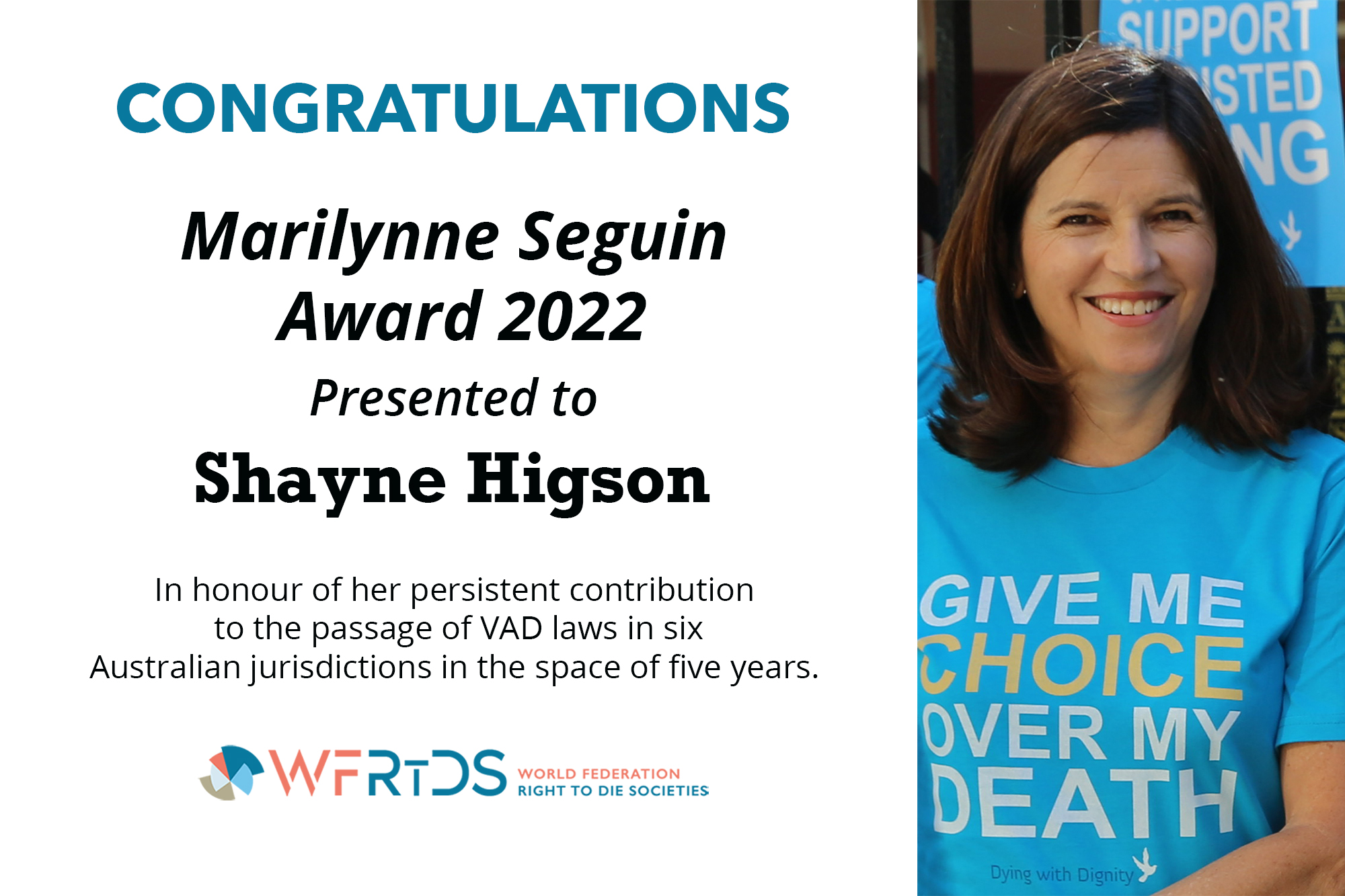 Over four days in early November, Dying With Dignity Canada hosted the World Federation of Right to Die Societies International Conference 2022 in Toronto, Canada. This biennial event, brought international delegates and local attendees together, providing an opportunity for networking, education and information sharing from across the globe. It was the must-attend event for clinicians, lawyers, advocates, and supporters who wanted to learn more about assisted dying in Canada and around the world.

Reports from the Conference were extremely positive.

At the Awards and Farewell dinner held on the final day, Shayne Higson was chosen by the World Federation Right to Die Societies as the recipient of the 2022 Marilynne Seguin Award - an award given “For the person who has achieved much in her/his country for their national right-to-die movement”.

Shayne Higson has been a dedicated advocate and campaigner for assisted dying laws in Australia since 2013 and she received the award "In honour of her persistent contribution to the passage of VAD laws in six Australian jurisdictions in the space of five years." Jane Morris from DWDV was thrilled to accept the award on Shayne's behalf at the dinner.

Shayne Higson's nomination was signed by the Penny Hackett, President of Dying With Dignity NSW because New South Wales was the primary focus of Shayne’s work with the wholehearted endorsement of the nomination from the other  ‘Dying with Dignity’ organisations in Australia.

Shayne is currently the CEO of Dying with Dignity NSW but she has had many roles over the past ten years including an important role in WA's campaign.

From Dinny Laurence, former board member and campaign manager of Dying with Dignity Western Australia:

“Shayne was a consultant to DWDWA during our campaign and helped to transform the association from a community organisation into a well-oiled campaign machine. She revamped our website and kept it up to date, established Nationbuilder as our communications platform for engaging with members and supporters, and used Facebook and other social media to keep in touch with the community and get it behind the campaign. She also established the Do Gooder platform to get supporters to contact their MPs and to submit stories to DWDWA to use as part of the campaign. She also helped to design and get printed campaign materials of all descriptions.

She came to WA three times during the campaign. She's a great photographer and took photos of the first rally on the steps of Parliament House, of the final steps Belinda Teh took from Kings Park to Parliament House at the end of her walk across Australia, and of the celebration after the final vote in the Lower House when the law was passed. The photos have been a great resource. 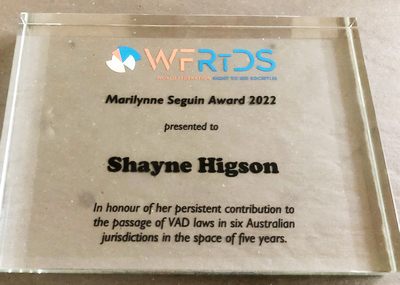 Although these "things she did" were indispensable, they do not do justice to how integral she was to our campaign, and what support she provided to me personally in my role as campaign manager. From her long experience with this cause both personally and professionally, and involvement as a candidate for the Voluntary Euthanasia Party she had knowledge and political experience that were beyond price, and also had media expertise. She would pull out all the stops to help me or anyone else involved with our campaign, or would find that help if she was not able to provide it herself.”

DWDWA congratulates Shayne on her award.