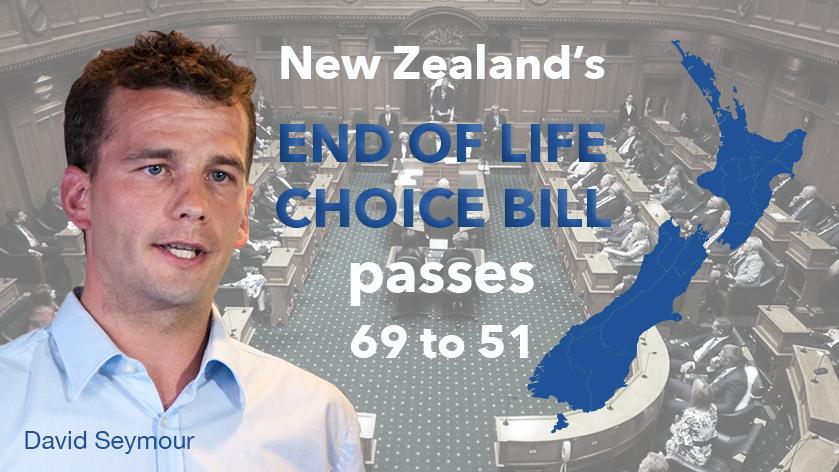 On Wednesday 13 November 2019 New Zealand MPs voted 69 to 51 to pass the End of Life Choice bill, ending the four-year journey through Parliament but it still has one more hurdle before it becomes law. In order to secure enough votes for the bill to pass its third and final reading, proponents had to support an amendment that required a referendum rather than it being legalised outright. New Zealanders will vote on the assisted dying referendum at the 2020 general election.

If passed assisted dying would be open to those who have been diagnosed as terminally ill and with less than six months left to live. It originally also covered people with "grievous and irremediable" conditions, but got narrowed down to get more support in Parliament.

Nearly a quarter of MPs gave speeches during the marathon debate addressing their own faith, ethnicities and personal experiences.

Labour MP Willie Jackson, who had not previously indicated his position, decided to support the bill giving a touching speech about his mother's deteriorating health.

"My mother changed dramatically from the passionate, strong Maori leader she was," he said.

"Last night I spoke with three of the most high-profile Maori leaders in this country.

"They all said they were tired of hearing that this was against our culture [tikanga]. Tikanga evolves and there is no one tikanga."

The bill has been subjected to heated debate both inside and outside of Parliament over the past few years and some people, including the Prime Minister Jacinda Ardern who supports the legislation, fear that the debate could become nasty in the lead-up to the public vote in autumn.

Historically, polls have showed there's majority support for some form of assisted dying in New Zealand. But the referendum will ask people whether they specifically support the End of Life Choice Bill and it's not clear what effect that might have.

Justice Minister Andrew Little has said the Government will try to provide objective information to the public ahead of the vote.

National MP Chris Bishop paid tribute to the bill's sponsor, David Seymour, despite his membership of the ACT party.

Following the historic vote Shayne Higson, Vice President of Dying With Dignity NSW, joined Michael McLaren on radio 2GB to discuss the New Zealand Parliament's passing of the bill and turning the final decision on assisted dying over to the public. You can listen to the 2GB interview here.