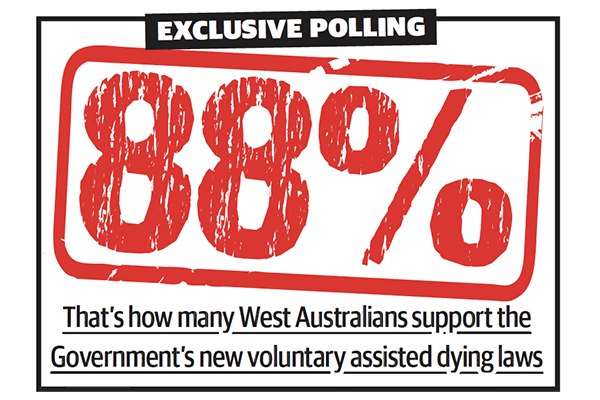 On Monday 26 August 2019, on the eve of the debate on the Voluntary Assisted Dying Bill 2019, a poll conducted exclusively for The West Australian revealed that nine out of 10 West Australians support assisted dying legislation.

This was the first major poll since details of the Bill were released and it also revealed that an overwhelming 93 per cent of people aged 50 to 59 said they would want to be allowed to end their own life with medical assistance if they were terminally ill with a condition causing intolerable suffering.

“This new research reinforces that view,” he said. “Our legislation strikes the right balance, developed over two years and includes 102 safeguards.”

These recent results are in line with earlier surveys on assisted dying. In late 2017 a Roy Morgan poll showed exactly the same results with 88% support for VAD. A national survey by COTA in 2018 showed 84% support and during the 2019 Federal Election, the ABC's Vote Compass survey of more than one million Australians showed 87% support.

This overwhelming support demonstrates that WA politicians who oppose the legislation are out of touch with the community.

You can read the full report here.