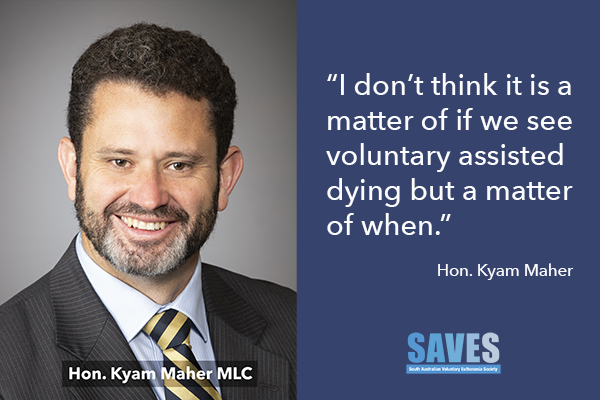 A new Voluntary Assisted Dying Bill was tabled in both Chambers of the South Australian Parliament on Wednesday December 2, 2020.

The Bill was tabled by Hon Kyam Maher in the Legislative Council and you can view his speech here.

The same Bill was tabled by Hon Susan Close in the House of Assembly and you can view her speech here.

The opening of debate in the South Australian Parliament comes at a time when the assisted dying movement is seeing great success and growing momentum.

Sept – Victoria released data on the first year of its VAD scheme demonstrating that this compassionate law is working safely and effectively.

Nov – Results of the NZ referendum on End of Life Choices showed that 65% of Kiwis wanted their VAD law to be enacted.

It is set to be a busy new year for VAD advocates with debates being finalised or commenced in February and March in Tasmania, South Australia and Queensland.