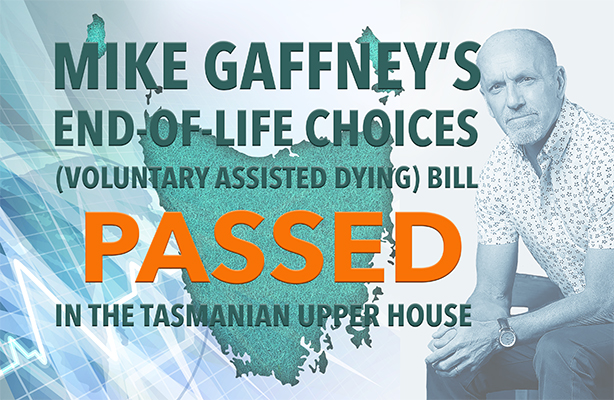 On Tuesday 10 November 2020 Tasmania’s Upper House passed laws to legalise voluntary assisted dying in a final vote that was unanimous.

Some of the amendments included the introduction of a prognosis clause, meaning a person must have been given six months or less to live (or 12 months for a neurodegenerative condition) before they can apply to access the voluntary assisted dying scheme, the patient would be required to make three requests for the drugs over a prescribed period dependent on their medical condition and the process will be overseen by a commission of five people.

Mike Gaffney delivered an emotional speech prior to the vote.

“After a very long road, I have done my job and so have the honourable members, my colleagues and my friends in this chamber. I’m so proud how we have worked and showcased our parliament to the rest of the world,” he said.

“To Tasmanians who may be listening who may seek assessment for the VAD process in the future, I hope that this legislation, most importantly, allows comfort and solace for the challenges that lay ahead of you.”

Campaigners Natalie and Jacqui Gray who have been running the ‘Your Choice Tas’ grassroots campaign following the traumatic death of their mother in 2019, sat in the public gallery to hear the final vote.

“Mum desperately wanted voluntary assisted dying in the last stages of her life, and we made the promise to her that we would advocate so others did not have to needlessly suffer the way that she did,” Jacqui said.

Mike Gaffney’s bill will now proceed to the House of Assembly on 3 December with an additional day on December 4 to ensure the initial debate can be completed, however, the final vote on the legislation won’t occur until February or March next year.

For more information you can read the following media reports –