Help us say thank you

Between August 2017 and August 2018, a state cross-party parliamentary committee held a substantial inquiry into the end of life choices. The committee read and considered more than 730 submissions, held 81 hearings and took evidence from more than 130 witnesses across the state.

Over 1000 people have signed the card to say thank you to the committee for its outstanding work.

The State Government is due to respond to the ‘My Life, My Choice’ report before the end of the year.

We know the community overwhelmingly support voluntary assisted dying, we need to demonstrate that huge support to the State Government and ask them to continue the good work of the committee by adopting the recommendations made in the report. 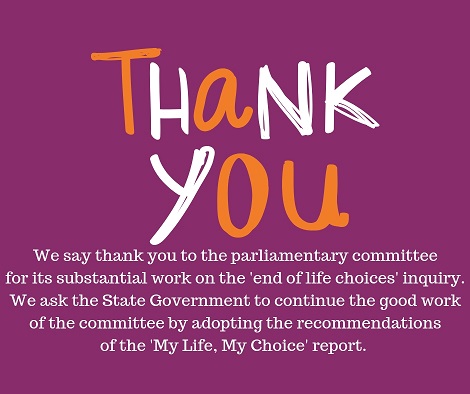 We have added the names of everyone who signed as at 2PM Monday 19 November to a huge print of the card. The card is ready to deliver to the State Government and the parliamentary committee on Tuesday 20 November 2018.

If you would like to sign up for more information about our campaign to protect freedom of choice to end suffering at the end of life, please complete the form below.

Thank you for being part of our community campaign to put choice and compassion first.