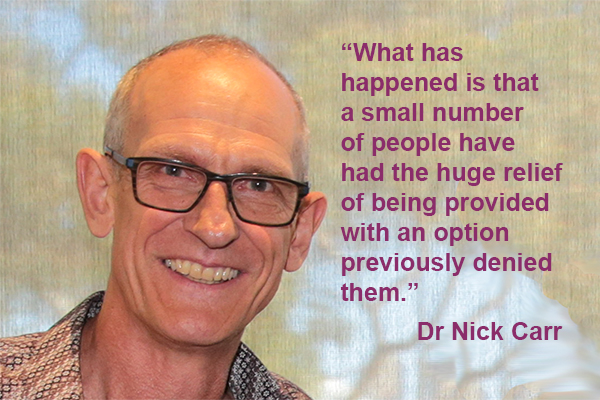 On 19 June 2019, Victoria’s historic voluntary assisted dying laws commenced. Despite opponents predicting a tsunami of death, the VAD Review Board’s report on the first 6 months of operation showed that the regime is working safely and effectively.

On the first anniversary of these laws coming into operation there were a number of stories reported in the media. There was the moving story of the peaceful death of 96 year old Keith English, told by his daughter Marita Scott.

Melbourne GP, Dr Nick Carr gave his perspective as someone who has helped a number of dying patients navigate the VAD regime, explaining what the nation can learn from Victoria’s embrace of voluntary assisted dying.

While the Victorian law is full of safeguards, there are some areas in which the the procedural requirements are excluding desperate people, with sometimes tragic consequences, such as the terrible suicide of Julian Bareuther, who met all of the criteria for VAD except the citizenship/residency requirement, despite having lived in Australia for 40 years.

Another story told how Allan Cornell spent his final days gasping for air as he pleaded for medication to end his life. “It’s too hard,” Allan said. “Too much bloody box ticking. Why do the bureaucrats get to make things so hard for me? It’s my life.”

ABC Radio’s Conversation Hour featured Justice Betty King, the chair of Victoria’s VAD Review Board, who has found the laws are working as intended but notes the difficulty in finding doctors, particularly specialists, who are willing and trained to assist with the VAD process, especially in rural and regional areas.

Finally, Andrew Denton spoke to the Weekend Briefing with his reflections on the Victorian laws and the prospects for VAD laws in other states which are unfortunately being held hostage by the religious conservatives in our state parliaments.