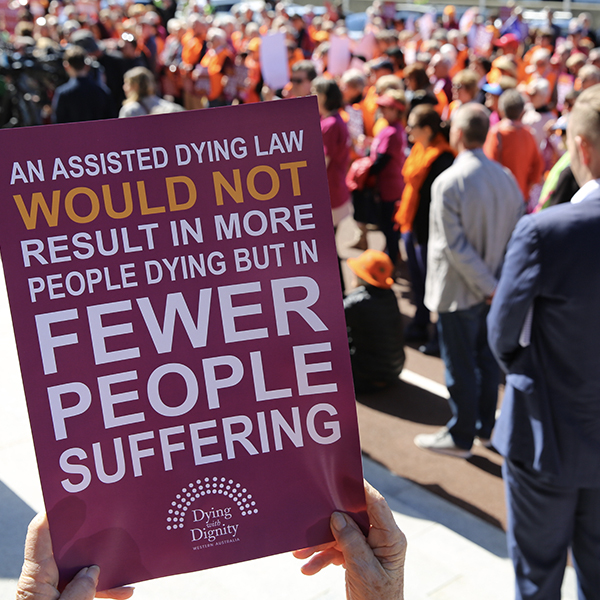 On Monday 12 November 2018, the Western Australian Government announced that it will introduce a Bill into State Parliament next year to legalise voluntary assisted dying.

The decision comes after the Joint Select Committee on End of Life Choices recommended the new law in its August report ‘My Life, My Choice‘, arguing that protracted death from a terminal, chronic or neurological condition can have a devastating effect on patients and their families. It also reasoned that for people with grievous and irremediable suffering, where death is a foreseeable outcome of the condition, voluntary assisted dying should be an option.

In a written statement, Health Minister Roger Cook said the Government was committed to ensuring that Western Australians have access to to high-quality end-of-life and palliative care.

“The introduction of a voluntary assisted dying Bill will provide those individuals who are experiencing grievous and irremediable suffering associated with advanced and progressive terminal conditions with an additional choice,” he said.

The Bill will be drafted in consultation with a panel of experts to provide advice to government on a safe and compassionate framework for voluntary assisted dying in Western Australia.

“Introducing this legislation is a complex and challenging task for the McGowan Government.  The expert panel, led by Malcolm McCusker QC, is essential for framing the legislation to best suit and safely serve the needs of the Western Australian community. I thank all the panel members for agreeing to assist with developing this important body of work.”

The panel of 11 members is comprised of leading health professionals, health consumers and legal experts.

“We wholeheartedly commend the appointment of Malcolm McCusker QC as the Chair of the Expert Panel and we fully endorse the appointed panel members who are held in high esteem by the health and legal professions," said Steve Walker, President of Dying with Dignity WA.

“We especially acknowledge the appointment of Noreen Fynn whose personal story and drive for compassion is truly admirable.”

Dying with Dignity WA also thanked the State Government for confirming its intention to introduce a Government bill in 2019.

“We look forward to a comprehensive and respectable debate and extend our hand to anyone in State Parliament who would like to talk about this significant issue.

“Many of us have been campaigning for legislative change since the 1980s and we believe protecting people’s right to freedom of choice has been a long time coming.

On Saturday 17 November 2018, The West Australian released the results of a poll conducted exclusively for The Weekend West. The poll revealed that 86 per cent of people want assisted dying made legal in WA, so if WA politicians oppose the voluntary assisted dying bill, when it is introduced next year, they will be out of touch with community views.

The result was even higher for those aged between 50 and 59, with ninety per cent saying they were in favour of the legislation.

According to the report in The Weekend West, the legislation is expected to pass the Lower House without much resistance; however, in the upper house the numbers are tighter.